OggPlay for S60 - OggPlay is a music player for phones running on the Symbian Operating system.
OggPlay plays OGG files, and on some platforms MP3 and AAC too.
OggPlay was first developped for the P800 and then released under the GPL by Leif H. Wilden. In a true open source project, OggPlay was ported to other platforms.
Some features of OggPlay:
+ Free!
+ Skins (you can make your own, or use already made ones)
+ User defined hotkeys
+ Autoplay

Ogg Vorbis is an audio compression format similar to mp3. However the compressed files are approximately a factor two smaller than mp3 files. To be more precise an ogg file encoded with 64kbit/sec gives approximately the same level of audio quality as a 128kbit/sec mp3 file.
The package in this page will only work on Nokia 6600, 6620 and 7610. For other phones, skins, support,... please visit OggPlay homepage: http://symbianoggplay.sourceforge.net/ 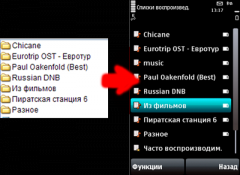 Other Java Freeware of Developer Freeware For S60

Comments to OggPlay for S60